Services on Saturday, Feb 4 @ 5PM & Sunday, Feb 5 @ 11AM are both indoors and streamed online.  Follow our Facebook page for updates.

Who Is This Jesus? 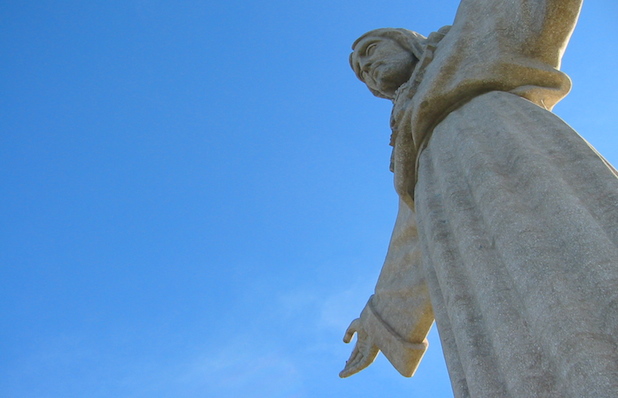 As we approach the Easter Season, we will begin a mini sermon series in which we will look at some of the claims Jesus made about Himself. These claims are nothing short of remarkable, some would say (and many of His contemporaries did say) were outlandish claims.  We will look at some of these claims beginning this Sunday, March 19th and will continue examining some of His claims until our Good Friday Service.

Throughout history there have been many religious 'leaders,' and 'spiritual' persons who claimed to know a way to experience happpiness or bliss or the gods or God Himself.  The claims of Jesus, however, stand head and shoulders above the claims of all other 'religious figures' in history because Jesus (among other things) claimed to be God the Son, the only way to have a right relationship with God. He claimed this and so much more.

When we examine His claims, there are really only so many options:

One: He was a legend or profoundly misquoted and none of these claims were made . The problems with this view are many. First, no credible historian denies Jesus existed. Even atheistic scholars concede He existed and people wrote about Him. Second, the manuscript evidence found throughout the old Roman Empire. Thousands of manuscripts. They are consistent. They do not contradict one another. Third, there is the 'problem' of the sudden explosion of the early church (what caused a small movement to become a massive movement in such a very short time?) not to mention to 'problem' of disciples and followers of Christ willingly embracing martyrdom because they claimed to have seen the Risen Christ, touched Him, preferring death over denying Jesus and having their lives spared. People will not willingly die for what they know is a lie. The legend hypothesis simply holds no water.

Two: He was a Liar. Perhaps Jesus made all sorts of claims about Himself and He knew they were not true. There are virtually no scholars who hold to this view. The sayings of Jesus and His reputation simply are not compatable with Jesus being a liar. And again, if this were the case, the explosive growth of the church and the martyrdom of His disciples would be illogical. No one willingly dies to cover up a lie. Sooner or later someone would 'break' under the pressure of being killed to 'tell the truth,' about Jesus. This option is not viable.

Third: He was a madman, a lunatic. Again, I've not encountered a scholar who holds to the view that Jesus was a deluded man who somehow managed to gather a following  of people willing to die for Him and spread His message across an empire. Psychologists have studied Jesus' statements, most notably the Sermon on the Mount, and have concluded that these are some of the most profound words in history, that if everyone lived by these words, the world would be so much better than it is. This theory holds no water either.

So we are left with a final option: Jesus was who He said He was, is who He claimed to be. If this is the case-then we all must respond to Him. If we really understand what Jesus says about Himself (and life and us), then we realize the one thing we cannot do is ignore Him.

Please join us for worship as we walk through some amazing claims Jesus made about Himself, and how they were received then, and how they are relevant to us now. Warning: this is not a 'safe' sermon series. Each of us will respond one way or another to Him during this time, and there are consequences for how we respond. Our responses ultimatley are the differences between life and death, freedom and bondage, darkness and light, reconcilation and alienation.

I hope to see you Sunday!

2023: Growing and Standing Strong in a Brave New World

Good News for a Broken World

2023: Growing and Standing Strong in a Brave New World

Good News for a Broken World

All Glory to the Risen King!

A Season of Prayer and Fasting, and, a World on Edge

2022:These Things are Necessary

Discover (or Rediscover) the Wonder of God's Gift to Us This Christmas!

Thankful for Our Volunteers!

What I'm Reading and Re-Reading

The (At Times) Uncomfortable Adventure

A Dark Day for America and Afghanistan: Reflections and Prayer

Walking in Truth in an Age of Lies

OUR GREAT GOD! PRAISE HIS NAME WITH US!

Choosing Faith and Joy in an Age of Fear and Anxiety

Standing Firm in the Storm

Why the Resurrection Claim Matters

Giving Thanks in All Things

Saturday and Sunday Services Returning to Normal Hours: What is Your Role?

Hope for a Spiritually Dead Culture

The Problem with Progressive (Woke) 'Christianity'

Christian Courage in the Age of Cancel Culture

Our Nation Needs the Gospel of Jesus Christ

Relaunch Date: When Will We Re-Open the Doors?

Resources For the Skeptic and the Seeker

A Word to the Anxious Christian

Conversations in the Age of Coronavirus

The Man No One Missed

Wisdom in an Unwise Age

Why We Proclaim God's Word

Young Men are Looking for Answers Everywhere but the Church

Where Did We Go So Wrong? (And Other Questions in a Post-Christian Age)

What to Make of Joshua Harris' 'Decision?'

Beyond Ministry as Usual

Missions: What is Your Field?

The Importance of the Resurrection

Preparing for Easter: Take up Your Cross and Follow

A Response to the National Church Assault Scandals

Lessons Learned From Pastors and Churches in Europe

That is a Human Being: Speaking Truth to Power

What Churches Must Do in Rapidly Changing Times

Why We Need The Ancient Paths

Christianity, the Church and Cutural Engagement in a New Dark Age: Part One

Lessons in Faith from Abraham

Praying for Revival Not Revivalism

Ten Ways To Completely Miss the Point of Christmas

The Call to Prayer: Faith, Persevering and Waiting

Moving To a Second Service: For the Glory of God and His Kingdom

Finding Our Story in Genesis 1-11

Be The Man: A Father's Day Reflection

Pilgrims,Tourists and Vagabonds in the New Dark Ages

Who Do You Serve?

In Praise of Godly Moms

Easter: We Cannot Keep This To Ourselves

Walk Across That Room Before Easter Sunday!

Who Is This Jesus?

The Doors God Has Opened